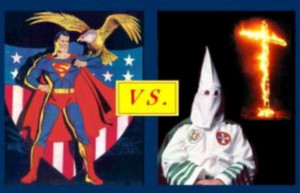 Superman has faced many powerful foes in his fight for truth, justice, and the American way.  This list includes super villains like Lex Luther, Zod, Dardseid, Brainiac, Doomsday, and the Ku Klux Klan.

Before “Batman v Superman”, the Man of Steel stood against the men of hate.

So what happened? Who won?

In post-WWII 1946 Superman found himself without an evil adversary.  Like all good comic book heroes of that era, he had spent the war fighting the Axis. But the war was over and the enemy defeated. What’s a superhero to do?

It did not take long for the unity for the WWII victory to fade. Shortly after V-J Day the Klan burned a 300-foot cross on the top of Stone Mountain near Atlanta, GA. as a proclamation of resurgence.  KKK members openly admitted this gesture was intended “to let the n*****s know the war is over and that the Klan is back on the market.”

At the same time, American author and human rights activist Stetson Kennedy had successfully infiltrated the group. But when he revealed his findings of illegal Klan activities to the local authorities, he found, much to his surprise, very little was done.  The KKK had become powerful enough that even the police were hesitant to take action against it, or they were part of the gang.

But much like the forces of fate that brought together the young Kryptonian Kal-El with the wholesome Jonathan and Martha Kent, Stetson Kennedy and the producers of the wildly popular The Adventures of Superman radio show came together.  Stetson Kennedy had a villain that need to be exposed and Superman had some extra time on his hands.

From June 10, 1946 to July 1, 1946 a 16 part radio series aired on The Adventures of Superman called “The Clan of the Fiery Cross“.  These shows exposed many of the KKK’s secrets, including code words and rituals.  Click HERE for more detail on the show and how Superman protected those persecuted by this domestic terrorist group.

How successful was the Stetson Kennedy inspired Superman radio series?  In their 2005 hit book Freakonomics, Stephen J. Dubner and Steven Levitt called Stetson Kennedy “the greatest single contributor to the weakening of the Ku Klux Klan.  The Klan relied a great deal on an inscrutable air of menace and mystery, and the Superman serial stripped the Klan of that mystique utterly. Almost overnight, the Klan’s recruitment efforts began to diminish.

So Superman defeated the KKK, of course! 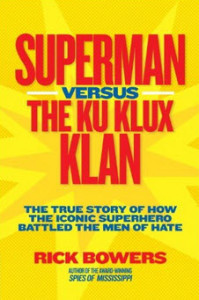 The book “Superman versus the Ku Klux Klan: The True Story of How the Iconic Superhero Battled the Men of Hate” by Richard Bowers expands the story how Superman took on the Klan and won.

As a symbol of hope, Superman was able to help diminish an institution dedicated to hate.  A timeless message for any age. 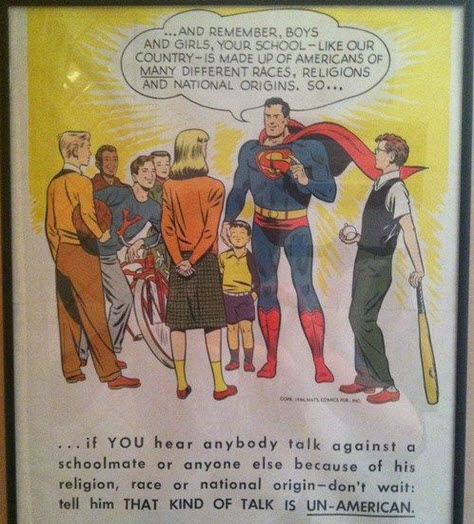 For a real treat, the entire original “The Adventures of Superman” radio series of “The Clan of the Fiery Cross” is on YouTube. Here is the first of the the 16 broadcast (you know what to do to find the others).

Is your website SEO healthy?  For good Search Engine Optimization, your website may need an SEO … END_OF_DOCUMENT_TOKEN_TO_BE_REPLACED

We use cookies to ensure that we give you the best experience on our website. If you continue to use this site we will assume that you are happy with it.OkPrivacy policy