The latest thing with the cyber-generation is…hugging.  But some see this as a dangerous trend.  WHAT!  So why the war on hugs? 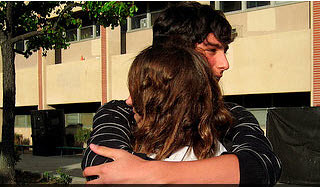 As the online generation comes of age there has been much speculation about how they will turn out.  This is a generation that doesn’t know a world without the Web.  They all have cell phones, mastered texting, and created a new form of flirting called “sexting”.  For those not hip enough to know about sexting see http://en.wikipedia.org/wiki/Sexting.
Their music is downloaded and they listen to it on MP3 players or iPods.  Email is almost considered quaint preferring to communicate via social networking with sites like MySpace and Facebook.  They multitask and are ADD with even their basic cable packages packed with 60 to 70 channels.  There has been much concern that this bombardment of technology will yield a generation that is cold and distant lacking in even the most basic etiquette…like using a fork.

But not to worry.  What are the kids doing?  Like a perfectly choreographed song and dance routine from a High School Musical they are breaking out in spontaneous hugging.  Bet you didn’t see that coming.

I can’t help but wonder if the same technology we feared would isolate the youth has had the opposite effect.  That thanks to the constantly connected Internet world they grew up in they are building connections and relationships.  And this is being manifested in the “hip to hug” youth fad.

Of course, there are naysayers who see this as troubling.  They are standing up and declaring a war on hugs.  Some see it as just slightly disturbing.  Perhaps these are the ones who use to fear cooties and gave our cootie shots when they were in high school.  And there are others who see this as down right dangerous.  It will lead to heavy petting, seat wetting and even…transvestitism.  Gulp!  I think we all know who they were.  They are ones who preach the virtues of abstinence only and wear virginity rings.  But they often end up trading in those virginity rings for diaper pins for out-of-wedlock babies.  It is always interesting how the ultraconservative state of Mississippi always seems to be on the top ten lists for teen pregnancies.

Some high schools have banned hugging and others have implemented a three second rule on hugging.  I just can’t het my arms around the idea of an anti-hugging policy.  Remember how silly those town leaders in the movie “Footloose” looked as they tried to defend the law that forbids dancing?  How much more ridiculous is it to see a bunch of supposedly educated adults talk about a three second hugging rule?  This is a Monty Python kid that practically writes it-self.

There is a wealth of studies on the positive impact of hugging.  Here are just a few website references:
http://www.lifepositive.com/Mind/personal-growth/hug/hug-therapy.asp
http://www.lifespy.com/2006/hugging-is-good-for-your-health-2/
http://www.sixwise.com/newsletters/06/07/26/how_hugs_are_proven_to_help_your_health_have_you_been_hugged_today.htm
There are many more!

I say we should embrace the technology that has helped connect “generation hug” and not throw out our kids with the social networking water they bathe in.  You can even text a hug by sending the following phrase: *hug*
Personally, I prefer the real thing.

Is your website SEO healthy?  For good Search Engine Optimization, your website may need an SEO … END_OF_DOCUMENT_TOKEN_TO_BE_REPLACED