I have been and shall always be a Star Trek fan.  There, I said it.  And while Trek tech is cool, it’s more about the biology than the technology that makes Star Trek soar.  The new Star Trek movie energizes my geek brain with all that cool gadgetry, but the heart of Trek is about relationships.  The real power and hope is that we not only see a possible future with technology that meets our every need, but that we use this technology not to blow each other up, but to help each out. 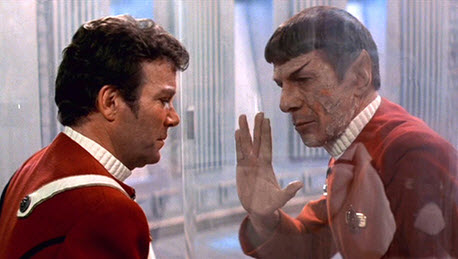 There has been must attention given to the fact that the gee-whiz technology from Star Trek has inspired real life innovation.  It is easy to see how Bluetooth is a descendant of the iconic wireless earpiece Lieutenant Uhura wore.  And the flip phone is so much like original series communicator.  “The fun in Star Trek didn’t come from copying science, but from having science copy it,” wrote Leonard Mlodinow, a former writer for the “Next Generation” series and former physics faculty member at CalTech, in the April 25 issue of Newsweek. “My job wasn’t to put real science into Star Trek, but to imagine new ideas that hadn’t yet been thought of.”

Other out-of-this-world technologies seem galaxies away such as transporters and faster-than-light warp drives.  But who knows!

It has always been my contention that technology solves problems.  But I have always found it interesting and even disturbing that we have made huge medical advancements for treating conditions such as malaria, asthma, and infection, yet millions across the globe still suffer and die without treatment.  As Spock would say, “It is not logical.”

That’s where the real hope of Star Trek materializes.  It is epitomized in the relationships of Kirk, Spock, McCoy, and the other Trek characters that have become a part of pop culture.  These people from different cultures, races, and literally different worlds look beyond the surface.  The form friendships rooted in their diversity and that are often uncomfortable.  Yet it is the power of these connections that draw us back to the Star Trek universe.

Star Trek movie spoiler alert!
I find it interesting in the new Trek flick that young Jim Kirk and Spock are at first adversarial.  Indeed this is what one would expect between two men of totally different cultures with one being fueled by passion and the other by logic and thought.  Yet we know a future where they develop an epic friendship that defines them both and brings us that famous phrase from the Trek lexicon, “I have been and shall always be your friend.”  Yes, it’s a bit corny, but you gotta admit that even the coldest Vulcan is moved by this display of universal friendship.

Okay, okay, I know I need to beam back to reality.  But if we are to be trusted with the awesome power of devices like mater-antimatter generators that fuel the starship Enterprise, then we have to learn to trust each other.  Perhaps then our great technological advances will reach across our differences to those who need them the most.  Perhaps we should not only imitate the science from Star Trek, but also the humanity.  Then we will indeed go where no one has gone before.
(Sorry, it had to be said!)
(Grin)

Is your website SEO healthy?  For good Search Engine Optimization, your website may need an SEO … END_OF_DOCUMENT_TOKEN_TO_BE_REPLACED