If you use social media such as Facebook is it okay to defriend?  What about ignoring a friend request?  Keep in mind that when you interact on a social networking website you are not interfacing with a machine, but with people with real feelings. 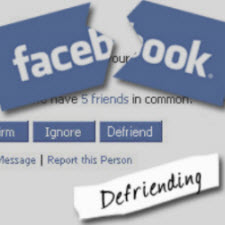 So keep in mind that real people with real feeling are attached to those profiles.  I am not going to try to be your mama and tell you have you should behave in cyber-space.  But I would like to offer some simple reminders of things you should already know.

In the biology of technology equation, I have always found it interesting that we often hide behind technology to avoid the reality of the human condition.  When we are buffered with a layer of technology we feel more liberty to be less human and more animal.  Traffic is a good example.  Whenever you cut off a car in traffic in reality you are cutting off a person.  Because, you know, people drive those cars.  If you cut someone off at the mall you might at least utter “excuse me” instead of blasting an obnoxious horn or flashing the finger.

Here are some things to think about for social networking relationships.

Here’s another good tip, did you know you can hide someone’s status updates without them knowing you have done this?   Here’s how:

And the great thing is they do not know you have done this.  Suppose you are dating someone who is a Facebook friend.  Then you have the break-up from hell and within two weeks they are in a new relationship.  So they are constantly posting Facebook updates about how much they are in love and all the silly romantic things they did with their new significant other.  Who wants to see that?  But if you defriend them they will know that they got to you.  However, if you hide their status you get the best of both worlds; you look cool without having to endure their silly status drool.

So in social networking and in life in general, let me refer to the immortal words of my fictitious friends Bill and Ted, “Be excellent to each other.”  And don’t forget, “party on dudes!”

Is your website SEO healthy?  For good Search Engine Optimization, your website may need an SEO … END_OF_DOCUMENT_TOKEN_TO_BE_REPLACED