A friend got a Roomba (http://www.irobot.com/) as a wedding present.  The Roomba is a robot vacuum cleaner. 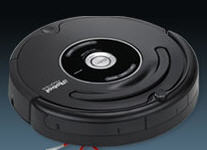 When she first got it out of the box I thought it was a bathroom scale and I thought, “What an awful wedding gift!”
But soon it was roaming around the room vacuuming up the dirt.  I could not stop singing the Styx song “Mr. Roboto.”  And once you start sing “Domoarigato Mr. Roboto” you can’t stop.  Try it!  (Grin)

I thought this could be the great grandmother of Rosie-the-robot form the Jetsons.  And I wondered why don’t we have a Rosie-the-robot in every household doing the mundane tasks of life?  Is it because we know that first comes Roomba, and then comes Rosie, and the next thing you know we have this?

I don’t think so.
There is no Rosie-the-robot because there is so much cheep labor available in a global economy.  Think about it.  Why build a robot to do a job when you can get a human to do it for pennies a day?

So should I get a roomba or an illegal immigrant to do house work?

And everybody knows that robots will turn on you.  The Cylons did in Battlestar Galatica, iRobot became a killer, and of course everyone’s favorite Terminator with his promise of “I’ll be back”.  People will not turn on you like that, no matter how hard we make then work for next to nothing.  Or will they?

Could we be bypassing great advancements because we have made the value of people so cheap?  Is it just a matter of time before the masses of people who’ve been discounted to a minimum value will be ready to “roomba”?   (Sorry, couldn’t resist)  And at that point we will be asking, “Where is Robocop?”   Oh, we didn’t invent it because it was too expensive and labor was so cheap.

Is your website SEO healthy?  For good Search Engine Optimization, your website may need an SEO … END_OF_DOCUMENT_TOKEN_TO_BE_REPLACED